A large majority of board games are competitive; in most of these games, you and your opponents are generally in a race to gain the most victory points or make it to the end of a track. These types of games are great for competitive people, but sometimes players want something a little bit different. For any group looking to work on their team-building skills, trying out a cooperative game might be the way to go. Here are two of our favorites!

I have talked about Marvel Legendary in a previous post, but it’s just that great that it deserves another shout-out here. Marvel Legendary is a cooperative deck-building game featuring all of your favorite Marvel characters. We love Legendary and not just because of the Marvel superhero theme (although it certainly is a plus!).

Legendary plays a lot like most deck-building games, but, although you are each building your own deck, you are working together to take down one central villain (the “Mastermind”) and his henchmen. Either everyone wins when you defeat the main villain, or everyone loses if the Mastermind completes his evil scheme before you can defeat him. You can also make the difficulty easier or harder depending on what Mastermind and scheme you choose. And, if your group wants to be competitive, each villain you defeat has a certain number of victory points that you can compare at the end in order to determine the “ultimate winner.”

The base game comes with a variety of characters to choose from so there are a lot of combinations you can make when setting up the game as you choose the heroes you want to add to your deck and the villains you want to fight. The game can be different every time you play, giving it great replay value. In addition, if you were to, for whatever reason, get bored with the options available in the base game, there are plenty of expansions to add even more variety to your game.

The only downside to this game is the long set-up time, especially the first time you set it up, and the equally long clean-up time. Luckily, the more you play, the easier all of that will get. Otherwise, Marvel Legendary is a great game, no matter whether you like deck-building games, are a fan of the Marvel Universe, or are simply looking for a fun cooperative game.

Anytime I teach Castle Panic in the café, I make sure to give players the following disclaimer: “Chances are very high that you will lose this game.” Most of the time, this turns out to be true, but there are those rare occasions where I return to a group when they’ve finished and they excitedly inform me that they won. Still, win or lose, Castle Panic is a great cooperative game that people tend to have a lot of fun with. 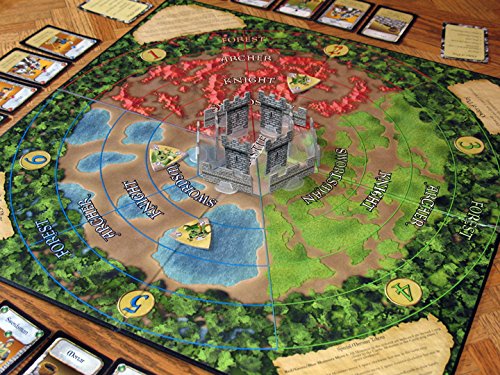 In Castle Panic, players are working together to defend their castle from invading trolls, goblins, and orcs. The board is set up in a circle with your castle in the middle. The monsters start on the outer ring of the circle and slowly move closer to your castle until you either defeat it or it hits your castle. You win when you have defeated all of the monsters and you lose when the monsters have destroyed all of your castle pieces. Players use cards to attack the monsters depending on what sector of the board they are in and you must work together as a team to plan ahead based on what cards other players have.

It seems simple enough, right? Simple until you have trolls closing in on you, ready to take down your defenses, and suddenly a tile is drawn that causes you and your teammates to lose half of your cards and worse still, you draw a boss tile that heals up all of the monsters on the board. Sometimes even the best planning isn’t enough to win this game; having a lot of luck with your draws is definitely part of it.

Most of the time it seems like Castle Panic is not enough “castle” and too much “panic,” but it’s still a really fun game. In addition to the base game, there are also a few expansions that you can add to your game and even a few different versions like Star Trek Panic or Munchkin Panic, just in case you aren’t “panicked” enough. Even still, the base game is plenty to keep you coming back for more.

Be sure to check out one of these games the next time you stop in!

Keeping Up with Your Cafe
10 Health Benefits of Playing Board Games
Get to know your sandwiches! part 1